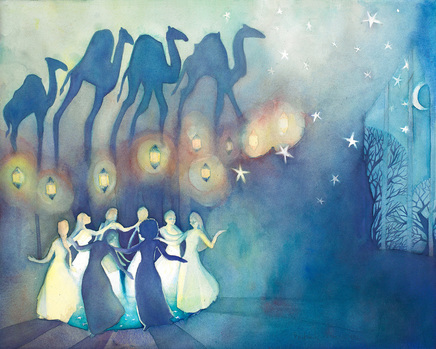 - the "belly" dance was not originally a dance of seduction

- not specifically a dance of the belly, as many more muscle groups are involved

- one of the oldest forms of dance, "originating with pre-Biblical rites worshipping motherhood and having as its practical side the preparation of females for the stresses of childbirth… It is the oldest form of natural childbirth instruction."

- bedside of woman in labor surrounded by her fellow tribeswomen (or she could labor while squatting, not necessarily in bed, but with the women forming a circle around her)

- men were not allowed to watch it in this ritualistic form (note from Yanika: I believe in our current day, however, men can be welcome to observe or even participate by drumming or meditating)

- purpose was to "hypnotize the woman in labor into an imitation of the movements with her own body. This greatly facilitates the birth and reduces pain from womb contractions. It helps the mother to move with instead of against the contractions."

- this dance "represents maternity, the mysterious conception of life, the suffering* and joy with which a new soul is brought into the world. …this most holy subject, expressed in an art so pure and so ritualistic… [with such] veneration of motherhood… that there are countries and tribes whose most binding oath is sworn upon the stomach, because it is from this sacred cup that humanity has issued." ~ quote from "The Dancer of Shamahka" by Armen Ohanian *(note from Yanika: regarding "suffering," this too is a conditioned idea which can be traced to the notion of original sin and that childbirth must be experienced in severe pain, more on this below**)

- "a gymnastic exercise for a natural function"

- this ritual is dying out due to the Western influence of making it so much about sex (note from Yanika: Morocco wrote this in 1964 and was already seeing it die out… So, now in 2014, has it died out further? Yes. But is it re-emerging? Yes! :-)

- ** "the idea that children must be brought forth in pain is a religious one, based on the concept of original sin and the penance to be exacted for it. The Bible states, 'In sorrow thou shalt bring forth children.' * Nothing is said about undue or excruciating pain, and yet the thought of agonizing birth pangs is pounded into our heads from the earliest age of understanding. Thus, childbirth is approached with bodies and muscles tensed in fear and anticipation. Instead of relaxing and helping nature along, we put stumbling blocks in her way."
*(note from Yanika: "sorrow" is still quite a punishment to bestow upon the oh-so-evil apple-biter woman… she wanted to taste knowledge, now she must have "sorrow" while creating new life… well, whether it's physical pain or emotional sorrow, the original Hebrew word has been translated so many different ways, and is basically negative either way. If we want to believe in curses and punishments for actions which weren't even our own {sorry Eve, even though I would've done the same thing in your position, I still prefer to believe that you're just an archetypal story which is trying to teach me guilt} - we can continue to believe that the birth process has to hurt to the point of feeling like we're dying. Or, we can teach ourselves to perceive the "pain" as necessary and pro-active sensation in the body, making a miracle happen.)

- compares technique of hypnosis (now termed as hypno-birthing) with the dancing circle; hypnosis removes the mental concept of painful childbirth so the woman can relax and concentrate on helping nature by moving with the contractions of labor

- Western women aren't used to moving their hips in the demanding ways childbirth requires (this may have been true in the 60's but perhaps not in these days of 'twerking' … still, many movements of the abdomen and hips don't get explored in our modern-day dance vocabulary)

- "childbirth must be prepared for. Dormant muscles must be built up little by little, step by step. All it takes is a little work, which certainly would never harm the mother or the unborn child. Strengthening the muscles also helps in carrying the child through pregnancy and greatly reduces stretch marks on the abdomen."

- camel waves during contractions (snake-like fluid movements of the chest and torso), involving lower spine, pelvis, diaphragm and abdomen. "Each little muscle must be found and developed in turn, before the whole can be manipulated to the extent that each split second can be perfectly controlled. Rather than sharpness and angularity, there must be smooth, circular, undulating motion."
Please check back soon for more notes on the intriguing origins of this beautiful dance form!
Birthdance!                 About Birthdance                  Fearless Birthing