Yanika
​Yanika C. (a.k.a. Nika Rey) was born in Odessa, Ukraine, in the former Soviet Union, and immigrated to Los Angeles with her parents at age six. She earned a Bachelor of Fine Arts degree from UC Santa Barbara in 2005 with Highest Honors, with a major in Theater and a minor in Russian language.

​Having spent the earliest formative years of her life in Odessa, the diverse port city on the Black Sea in Eastern Europe, Yanika’s tastes and talents developed in a unique way. The majestic geography of an ancient seabed along with the area’s historic Carpathian mountain ranges haunted her dreams and visions as a young child - memories she now recalls as those of an entire history upon planet Earth, as if she had climbed out of that very sea, ages ago, and evolved along with the land, a native.

Her romanticized notion of such an indigenous existence contrasts with her life’s mostly urban details, and she ﬁnds creative challenge and motivation in this polarity. Her urge for soul-exploration has led to various theatrical productions, teaching and performing many world dance styles, pursuing a personal craft of visual arts while living in the woodlands of Northern CA, earning a certiﬁcation in yoga instruction, and spending a year of life abroad in Cairo, Egypt, finding lifetimes of adventure and inspiration.

My heroes are my mama and papa, who are also artists; and the deepest wellsprings of joy in my life are my son Geo, daughter Delphi, and their papa, Eric. Together we dream of opening an arts center located on a homestead, as well as traveling the world, teaching/learning and performing. 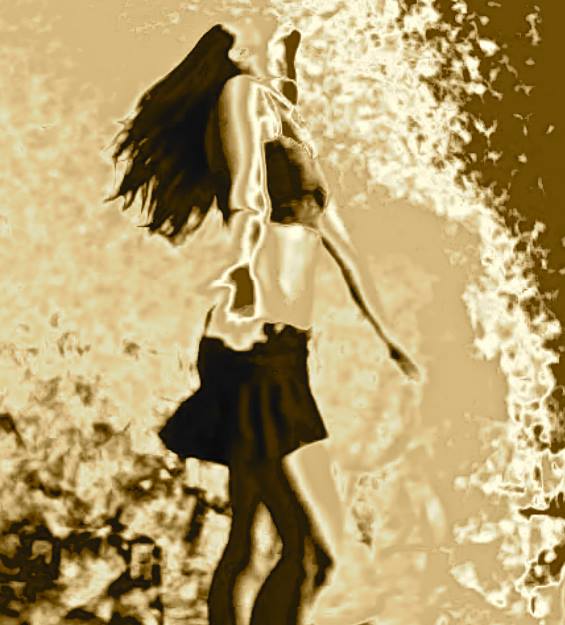